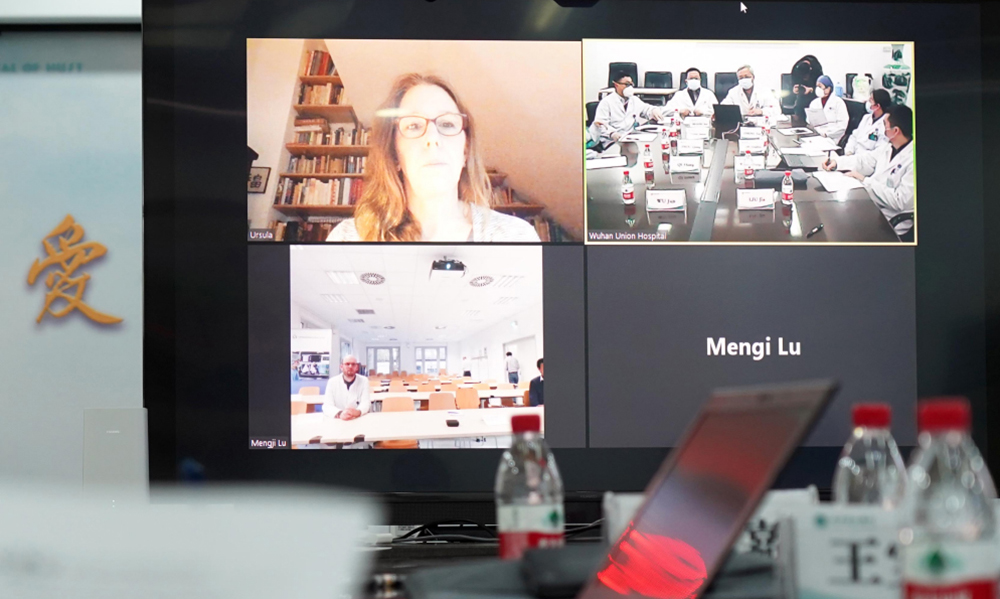 Experts from Wuhan Union Hospital hold a videoconference with counterparts from the University of Duisburg-Essen in Germany on Friday, sharing experiences on fighting COVID-19. LIU KUNWEI/FOR CHINA DAILY

When Wang Hongbo, a professor of gynecology at Wuhan Union Hospital, received a request from 14 hospitals in the Netherlands for an online consultancy on the diagnosis and treatment of patients of the novel coronavirus pneumonia in mid-March, he responded immediately.

On March 16, Wang and his colleagues got connected with representatives from these hospitals, including Bravis Hospital and Elisabeth-Tweesteden Hospital, and shared with them their experiences and suggestions on fighting COVID-19.

"This has been the first time our hospital has had a videoconference with doctors from outside China on treating COVID-19 patients, but we will be glad to have more similar interactions to share our knowledge and experiences with all the world to save more patients," said Wang, who is also deputy Party chief of the hospital in Wuhan.

During the videoconference, which lasted for about an hour, doctors from the hospital answered questions from their Netherlands counterparts, including how to identify novel coronavirus pneumonia patients with atypical symptoms, the contagiousness of patients, the isolation of patients, useful drugs in fighting the disease, methods to save critically ill patients, and protective measures for medical staff.

Since late January, Wuhan Union Hospital－one of the top hospitals in the city, which was the hardest hit by the COVID-19 outbreak in China－has received 1,600 patients, many of them in serious condition, and half of them have recovered and been released, said Wang.

"We have accumulated a lot of experiences in epidemic control and treatment of novel coronavirus pneumonia patients, especially serious patients, and we immediately agreed to help when approached by these hospitals," he said.

"We will provide them with unconditional technical support in treatment of patients, since there are no boundaries in medicine and we all share the same goal of saving patients," he said.

In addition to Wuhan Union Hospital, some other major hospitals in Wuhan, the capital of Hubei province, have responded to calls for assistance from hospitals in other countries hit hard by the pandemic, and have been sharing Chinese knowledge and experiences.

Although the epidemic has been put under control in the city after arduous efforts that included a strict, t和记娱乐ag旗舰厅wo-month lockdown of Wuhan, new cases and deaths have been rising quickly worldwide, putting extraordinary pressure on the healthcare system in countries such as Italy and the Netherlands.

Earlier this month, doctors from Tongji Hospital, another of Wuhan's top hospitals, had a similar videoconference with their counterparts in Niguarda Hospital in Milan, Italy.

During the one-hour online discussion, they covered a wide range of topics, including control and prevention of the virus, diagnosis and treatment, and protection for medical workers.

Zhou Ning, an associate professor of cardiovascular diseases at Tongji Hospital, had warned of an imminent, massive outbreak in Italy after concluding the discussion, and said he and his colleagues were willing to share their experiences with their international counterparts.

Wang Daowen, the director of the hospital's cardiovascular department, said, "Humankind all share a common destiny, and combating the virus is our common task."

"We have more experience in fighting novel coronavirus pneumonia, and it is our obligation to share it with other countries, many of which do not have much knowledge of how to treat patients who are seriously ill with the disease."

Compared with some other countries, China may have advantages in overcoming the COVID-19 crisis due to its unique system, said Wang Hongbo at Wuhan Union Hospital.

"We could mobilize the resources of the whole country to support a city (Wuhan), and that is why we could make great achievement inthe epidemic control in a short period of time," he said.

For example, more than 40,000 medical workers, along with large amounts of medical equipment and materials from across China, were sent to Hubei province, including Wuhan, in late January and February during the height of the epidemic in China to aid local doctors and nurses. This played a key role in containing the disease in the province, he said.

On March 17, doctors from Wuhan Children's Hospital also shared their experiences with counterparts from 27 countries, including Australia, the United Kingdom and the United States, on the treatment of coronavirus-infected babies.

During the videoconference, which lasted more than an hour, the Chinese doctors shared their knowledge, including whether antiviral drugs should be used for babies, the mortality risks, and methods to quarantine babies.

Zeng Lingkong, a leading pediatrician at the hospital, which is a designated hospital in Wuhan to treat babies infected by the coronavirus, sa和记娱乐ag旗舰厅id the isolation wards in the hospital were established after the outbreak to prevent cross-infections.

Although the hospital had no previous experience in saving babies with such a highly infectio和记娱乐ag旗舰厅us disease, doctors kept improving efforts and managed to help most of them recover, he said.

In addition to hospitals in Wuhan, health authorities in China are also intensifying international cooperation in fighting COVID-19.

In mid-March, the National Health Commission and the World Health Organization hosted an international videoconference to share Chinese experience in the prevention and treatment of COVID-19 with other countries affected by the epidemic.

Ma Xiaowei, the minister of the NHC, said China is willing to share its experience with other countries, including highly efficient mobilization from the top, scientific and precise epidemic control strategies and use of new technology, to contribute to global health security.

The commission and the Foreign Ministry jointly hosted a videoconference on Ma和记娱乐ag旗舰厅rch 19 in which experiences were shared with representatives from 18 European countries, including Norway, the UK, France, Germany, Italy, Spain and Switzerland.

"China will stick to the concept of a 'human destiny community'和记娱乐ag旗舰厅 and intensify international cooperation in fighting the epidemic, including with European countries," the Chinese embassy in Norway said in a statement. "We believe that with concerted efforts from all parties, we will be able to conquer the epidemic earlier."